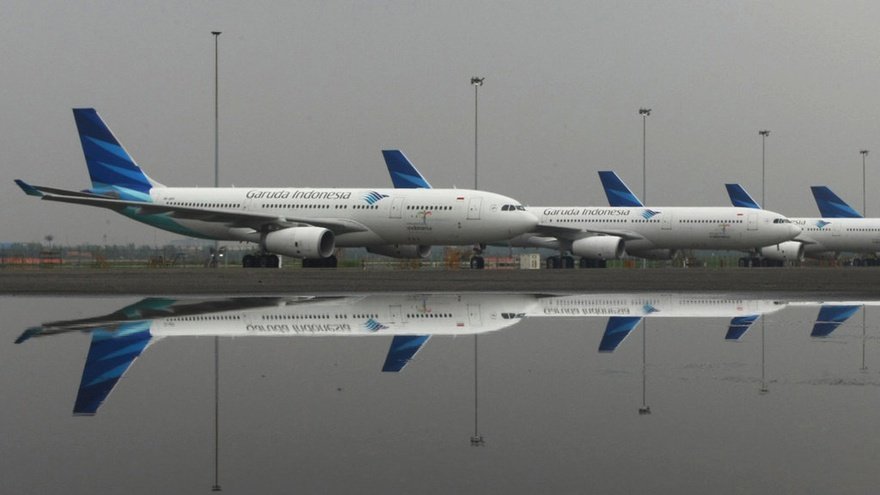 In the face of shutdowns, lockdowns, and restrictions on air passengers, many Indonesian airlines have felt compelled to temporarily suspended operations or reduced flight frequencies.

Detik.com described the apron areas of some airports in Indonesia as some sort of “zombie region” crowded with empty, idle, parked airplanes.

CNBC reports that a lack of market demand has caused AirAsia Indonesia to suspend operations until 30 September 2021 and Lion Air to ground 80%-90% of the armada temporarily. Airlines idling their aircraft insist that routine upkeep and maintenance continue on the grounded planes.

The Indonesian national flag carrier – Garuda Indonesia revealed in reports in June filings with the Indonesian Stock Exchange that they were operating some 53 airplanes from a total fleet of 100 aircraft. Garuda said the deployment of only half their fleet reflected current market conditions, diminished by official lockdowns and continuing restrictions on public movement.

The Deputy-CEO of the government-owned airport management company, PT Angkasa Pura II, Edwin Hidayat, confirmed that many airlines had reduced the number of aircraft in active operation.

During a hearing before Commission VI of the National House of Representative (DPR-RI), Hidayat said: “All Indonesian airlines have reduced their number of operating aircraft. At present, the number of airplanes flying is very small. For example, Garuda Indonesia that could operate before the PPKM shutdown 142 airplanes, now only operated 41-42 planes.”

Passenger demand remains low. The number of passengers carried in June was little changed from May, he added.

When quizzed by reporters on the number of idle aircraft parked at the nation’s airports, PT Angkasa Pura declined to comment, suggesting the press should request that information from the respective airlines.

Eye in the Sky

To grasp the number of aircraft parked and idle at the Soekarno-Hatta International Airport on the outskirts of Jakarta, we include a screenshot from Google Earth showing a large congregation of planes parked around the Garuda Maintenance Facility (GMF) and Terminal I.

The Secretary-General of the Indonesian National Air Carriers Association (INACA), Bayu Sutanto, observes that the use of airplanes is at a minimum. He said this is because of PPKM travel restrictions based on risk categories 1 through 4. “The number of passengers which are still at a minimum or low demand is caused by continuing PPKM restrictions. Meanwhile, the PPKM category status is dependent on the number of vaccinations, the public’s discipline in following health protocols, and the number of reported new infections,” explained Sutanto.

Sutanto projects that if the number of new COVID-19 cases continues to decline, the level of PPKM alerts will correspondingly lower, which will result in more people traveling on airplanes. “Probably, when a region’s PPKM level is reduced to Category #1, then travel restriction will be loosened, and the number of air passengers will increase,” said Sutanto.