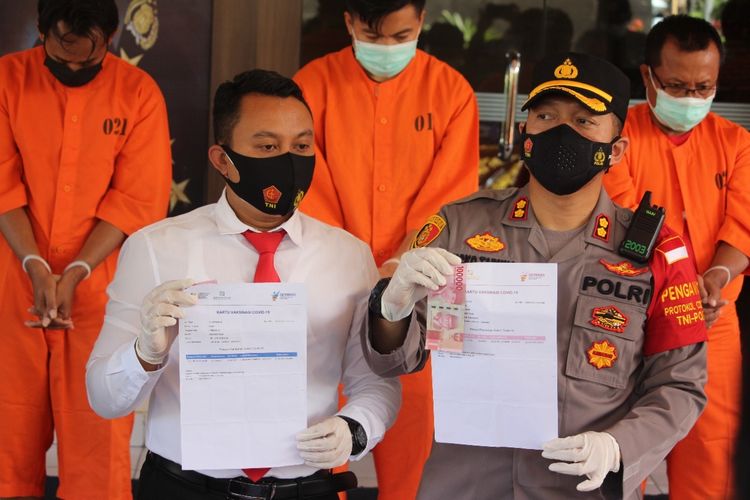 The four men are accused of providing falsified inoculation certificates to 18 ship crew members preparing to sail from Padangbai in Bali to the Port of Lembar in West Lombok on 26 August 2021.

Police have also named and arrested the 18 crew members as suspects in purchasing the bogus certificates.

The arrests were announced by the Head of the Karangasem Police Precinct, AKBP Ricko AA Taruna, mid-day on Monday, 30 August 2021.

The four counterfeiters all hail from Kampung Dames in the Village of Seruni Mumbul in East Lombok. The police announced the names of the four men: Yus Rusmana (45), Syarif Hidayat (29), Iyan (45), dan Abdul Hafif (29). Three of the four were apprehended at their places of residence in East Lombok on Thursday, 26 August. The fourth man, Syarif Hidayat, was arrested earlier on the same day at the Bali Port of Padangbai.

The 18 seamen form part of 31 people arrested on 26 August 2021 at the Bali Port of Padangbai, preparing to cross the Lombok Straits to Lembar, West Lombok.

In addition to the 22 people now in police custody in connection with the falsified certificates, police are also holding as evidence the 18 counterfeit documents, four handphones, cash in the amount of Rp. 3.4 million, a laptop computer, a computer monitor, a computer printer, and the vehicle used by the group.

Under Section 263 paragraphs 1 and 3 of the Indonesian Criminal Code Number 55 (KUHP), the 22 men face a maximum penalty for producing or using falsified documents of six years in prison.

Although the COVID-19 vaccination process in Indonesia can prove time-consuming, vaccination is free and heavily promoted by the government across Indonesia.

Proof of Address Not Needed for COVID Jab