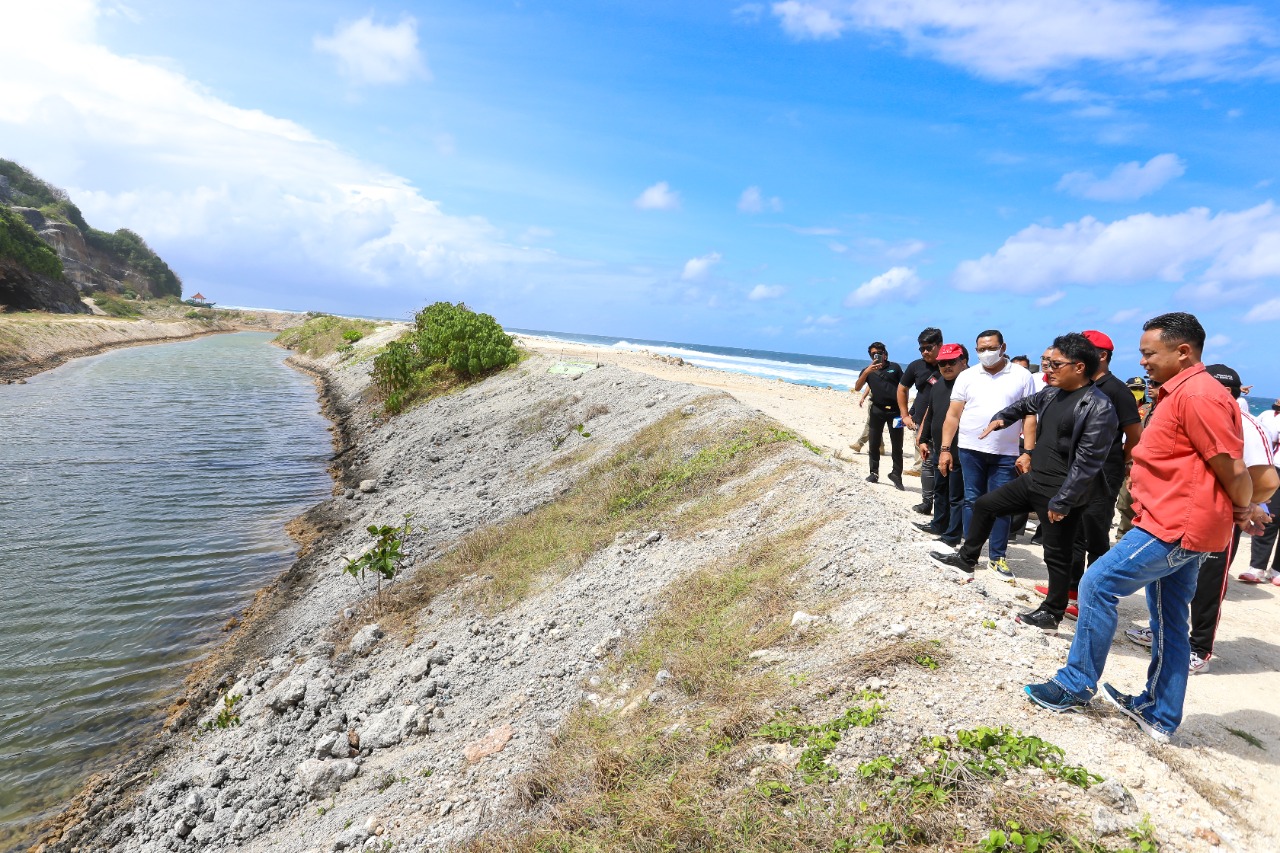 The practice of the misappropriation and misuse of public seaside property in the Ungasan beach area of Bali remains in the news and has entered a new chapter now that the Bali Provincial Police have acted against a case of suspected illegal reclamation on the southern peninsula of Bali. As reported by RadarBali.com, police have recently installed a “police line” along a stretch of the beach after. Police Commissioner Surawan – Head of the Criminal Division, accompanied by I Nyoman Giri Prasta – Badung Regent, visited the beachfront on Friday, 01 July 2022, at mid-day.

Police Commissioner Surawan told RadarBali.com that he suspects a crime had been committed through the illegal and unauthorized use of public land and an illegal reclamation project at Ungasan Beach. “The result of our review shows there is criminality involved. Yes, reclamation has taken place, and we will soon call other parties, such as the company in charge and local fishermen,” said Sarawan.

Sarawan said the beachside parcel of land developer, PT Tebing Mas Estate – a company registered in Surabaya- will soon be summoned by the Bali Police. “We have sent a summons to the owner and management to provide information in their capacity as witnesses. Because of the illegal reclamation underway, we have installed a police line. If reclamation is underway, there must be a recommendation from the Ministry covering the environmental aspects. It seems that the party undertaking the reclamation does not hold the required recommendation from the Ministry,” said the police in charge of criminal investigations.

The PT Tebing Mas development is reportedly working to transform the limestone cliff area in the Ungasan Village area into a tourism destination featuring numerous luxurious beachside facilities and a cultural stage. The developer is accused of undertaking a reclamation of the seafront area without the required permits and licenses.

An earlier case, dating from November of 2021, saw Regency officials take issue with the allegedly illegal use of public right-of-way coastal lands under a contract between the village elders of Ungusan Village and the Karma Kandara Resort. Bali provincial authorities questioned the legality of public lands being “leased” to private entrepreneurs.

Both cases involve the same antagonists engaged in a legal struggle. Seeking to reaffirm Provincial control over public-access rights or ways is the Regent of Badung, I Nyoman Giri Prasta, who accused the Village Chief of Ungasan, Jro Bendesa I Wayan Disel Astawa, of usurping and misappropriating public lands. Giri Prasta and Wayan Disel Astawa are long-standing foes from opposing political parties.

The head of the Ungasan Village supervises the new development by PT Tebing Mas Estate, Jro Bendesa I Wayan Diesel Astawa and is now part of the larger project on Melasti Beach that includes a recreation area and a performance stage.

In addition to summoning PT Tebing Mas Estate, the Bali Police will soon send summons to members of the public working as fishermen who may have collaborated in the suspected illegal reclamation.

Speaking from the site of the reclamation, the Regent of Badung, I Nyoman Giri Prasta, told the press that his office had reported the illegal reclamation project. “There’s proof of using coral. This violates the regulations and destroys the ocean’s ecosystem together with the sea life,” said Giri Pasta.

A separate report by kabarbalihits said that PT Tebing Mas Estate paid the Village of Ungasan Rp. 15 billion and Rp. 700 million to be allowed to construct the Praharsacitta Panggung performance stage and other sections of the cultural park.

The stage would employ villagers who would be paid for performing traditional dances to the public.

The Bali Police, accompanied by the National Land Agency (BPN), visited the location on the Ungasan beachfront to survey the reclamation area and ascertain the size of the shore and bottomland damaged by the illegal reclamations. Police are expected to charge PT Tebing Mas Estate, the company established in 2016, and a group of local fishermen/boat operators helping reclamation.

The Regent told the press that an individual who directed the local boat owners to undertake the illegal reclamation is also being sought.

Bali Shoreside Businesses to be Closed?