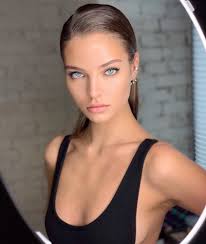 In the growing number of Russian nationals misbehaving in Bali, a video has emerged of a Russian model posing nude in several settings in Bali that were uploaded to the Internet. One of the poses included the woman reclining “au naturel” atop a tame elephant in Taro, Tegallalang, Gianyar in Bali.

Radar Bali noted that the young Russian woman, Alesya Kafelnikova, is a professional model from Russia and the daughter of a former international tennis star, Yavgeny Kafelnikova.

When the nude pictures began appearing on the Internet, the resulting public outcry came to the Bali Police’s attention. The police soon summoned Alesya to explain her potentially criminal acts to the officers assigned to the case.

During police interviews, the Russian provided details of the filming that she said took place at an animal park in Taro, Tegallalang, in Gianyar Regency. Police eventually concluded that there was no evidence that the Russian woman had committed any crime by uploading her pictures to her Instagram Account (@kafenikofa_a) on Saturday, 13 February 2021.

The video, now deleted, went viral shortly after being uploaded to social media. Because of the resulting uproar, the Russian removed the video on Thursday, five days after its initial appearance.

Police determined that no criminal act occurred because the video’s upload was done solely for artistic purposes. Alesya told police she saw the photo images as art and an expression of her love for animals and nature.

Police said Alesya’s acts had also been mitigated by her public apology and readiness to delete the controversial subject video.

Russians Nabbed After 13-Days on the Lamb

Russian Gets 5.5 Years for a Gram of Ganja