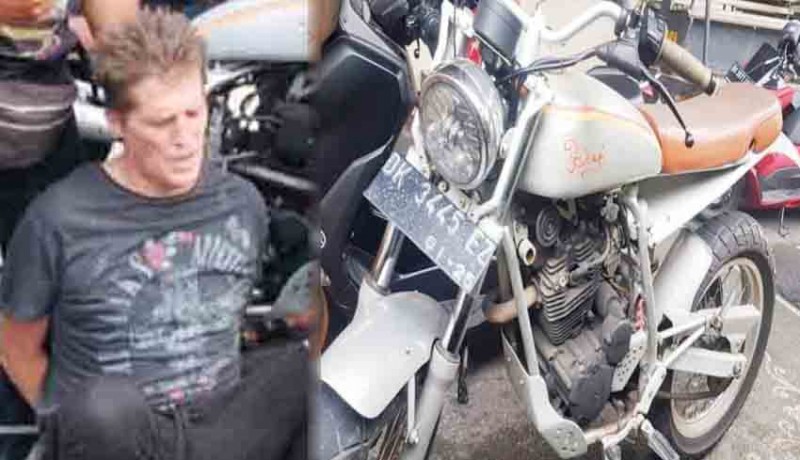 Gilles Thomas Allcard William (43) from the UK has been in police custody in North Kuta since 29 November 20222.

As reported by NusaBali.com, the Englishman was caught in possession of a stolen customized Scorpio motorcycle owned by an Australian expatriate in Bali,  Anthony James Mcinerheney (59).

Police arrested William on Jalan Tegal Sari in the Village of Tububeneng, North Kuta, approximately 8 hours after Mcinerhenry reported his motorcycle missing. Mcinerhenry told police that he had spent hundreds of millions of Rupiahs in modifying and customizing the bike.

Officer Ketut Sudana, a spokesman for the Badung Police Precinct, said on Wednesday, 30 November 2022, that the motorcycle was stolen off Jalan Pantai Batu Bejan in Canggu, North Kuta, the previous Monday at around 9:00 am. The theft of the bike was easily accomplished because the bike was on and running when William allegedly snatched the vehicle.

Police postulate that the UK national saw the motorcycle idling at the location of the theft and used the opportunity to steal the bike just moments before Mcinerhenry realized his motorcycle had been snatched.

After undertaking a search of the surrounding area, the Australian reported the theft to the Police. The police rushed to the location of the crime and interviewed witnesses to the incident. The evidence collected by police led to the eventual arrest of Gilles William, who was traced to a residence in the Village of Tibubeneng, North Kuta. Police found the stolen motorcycle at William’s residence

The recidivist Englishmen will now face charges under Section 362 of the Criminal Kode (KUHP) with a possible maximum penalty of 5 years in prison.